Festival fun... but not like it used to be.

Taking children to festivals can be a hard decision.  My wife and I love festivals, it's a great way to let your hair down, get away from it all and forget about the outside world for a day or a weekend.  We met at Glastonbury, we love our music and we love camping, it's essentially in our blood.  So when it came to when we should introduce India to festivals, it was a little tough to decide how.  Initially I thought that we should just take her in a baby-backpack and lug her around all weekend, and then it dawned on me... I'd also need to lug her changing bag, favourite toy, spare dummy, blanket, coat and whatever else Mum decided she needed at the last minute - Going to a weekend long festival with a 6 month old was not an option, so we thought we'd do it gradually. 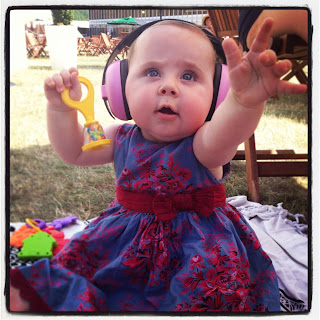 We started with a day festival in Hyde Park. I'm not sure about you (people that live outside the big smoke), but there's something off-putting about trying to lug something the size of a mini through the London Underground. Navigating it on your own steam is bearable, but when you've got half your hallway attached to a pram and you're trying to get down an escalator it's a completely different, sweaty experience.  We had bought a pair of baby ear defenders which we discovered were perfect for keeping the hustle, bustle and bass out of her tiny ears, and helped her to sleep during the afternoon.  To be honest, it was a breeze in the proverbial park, the pre-event stress was soon eradicated by the perfect day, and India just thought she was having some quiet play time!

On our next instalment we were slightly braver. We managed to get hold of some tickets for Secret Garden Party which is, shall we say, slightly less child friendly than a London royal park, but nevertheless we gave it a go for a day.  This time, the kit had doubled.  We needed warmer clothes for the evening (for all of us) and enough food and nappies to last, on the slight off chance there was an apocalypse and we couldn't get home till the following Wednesday.  The bottom of our pram looked like we'd been shoplifting at a jumble sale.  This festival went down a treat, India was still dancing in her pram with her ear defenders on long after we'd slurped a couple of coffees to enable us to tackle the long journey home. 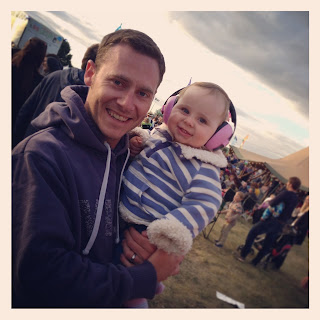 Last weekend we went the whole hog.  Two nights, three days and stinking hot weather at the Big Feastival.  Thinking back to my twenties when I used to chuck a tent, a small bag and a case of cider in the boot of the car and shoot off down to Devon, this in comparison, was like preparing to move house.  I don't think I've ever managed to squeeze as much into my car as I did on Friday lunchtime - from formula to flip flops and travel cot to tent, it was all in there, I actually thought the wife was planning not to return home at one point.  Entertaining a little one (or two for that matter, with the addition of our friend's 3 year old) for the duration of the weekend was actually easier than we had anticipated.  It turned out that the biggest challenge of the weekend was the sober attempt to cocoon our darling daughter in her sling on the Saturday afternoon, only to stare at each other with a mix of confusion and bemusement whilst recalling the much easier attempt the previous evening, when we'd managed it in 20 seconds flat after a fair few ciders. As a result I was left carrying her on one arm for the remainder of the day and returned my back to it's crooked shape for the fifteenth time this year.

I must say, if you're passionate about music, being outdoors and introducing the little people to a whole new world of experiences then I would highly recommend taking them to a festival, there are loads of family friendly ones out there, from Camp Bestival to Lollibop.  They will probably cost you a months mortgage, and then some, but the smile you get on their face when you're dancing and singing out of key to Mr Tumble's version of the hokey-cokey is well and truly worth every penny.  Trying to change a nappy on the side of a barrel, or feeding lunch whilst angrily fighting off dozy wasps can have it's challenges, but life is never simple - so you just tend to suck it up.

A word to the hedonistic wise; if you want to have a carefree and nappy free weekend away without feeling like you've been used as a buckaroo for the entire duration, then drop the kids off at the grandparents and head off into the Friday evening sunset on your own!